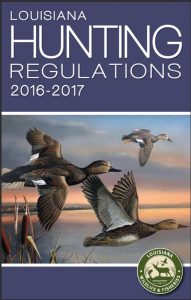 The Louisiana Department of Wildlife and Fisheries (LDWF) is available for viewing or download here:

Quoted from the PDF on the LDFW’s website, these are some of the major changes which changed from the 2014- 2015 hunting season: